The Health Ministry received a timely boost after the Budget 2017 saw the government allocate RM25 billion for four healthcare programmes.
In the Budget 2017 speech in Parliament today, Prime Minister Datuk Seri Najib Abdul Razak announced that the allocation will be used to build and upgrade new hospitals and clinics in Perlis, Kuching, Mukah, Jempol, Muar and Johor Baru.
"To upgrade hospital facilities with an allocation of RM536 million. This includes provision of cardiology treatment equipment for Serdang Hospital, Pulau Pinang Hospital and Sultanah Aminah Hospital in Johor Bahru as well as purchase of 100 ambulances," he said.
The remainder of the allocation, Najib said will include RM4.5 billion for the operations of 340 1Malaysia Clinics, 11 1Malaysia Mobile Clinics, 959 health clinics and more than 1,800 existing rural clinics.
"Another RM4 billion has been set aside for supply of drugs, consumables and vaccines to all government hospitals and health facilities," he added. 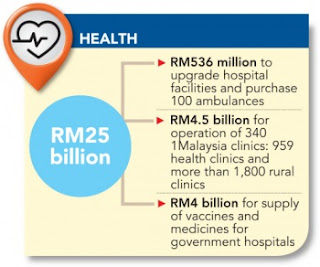 MALAYSIANS who cannot afford expensive healthcare services but dread the long queues at government hospitals will soon have another option.
Non-profit charitable hospitals will be able to charge the same rates as government hospitals under Budget 2017, thanks to the Government’s collaboration with the private sector and NGOs.
“RM20mil is allocated in the form of loans for the hospitals to buy equipment.
“The Government will also allocate RM110mil, of which RM70mil is for medical assistance, benefitting nearly 10,000 underprivileged patients,” he said. The collaboration is aimed at reducing overcrowding in government hospitals.
A total of RM25bil was allocated to the Health Ministry in Budget 2017, reinforcing the Government’s stand on improving the health level of the rakyat and the quality of healthcare in the country.
Private haemodialysis centres have not been left out of the Budget; the Government has allocated RM40mil in the hope of encouraging more of such facilities.
“The Government will provide one-off grants worth RM200,000 to haemodialysis centres to buy the necessary equipment,” he said.
Also, RM4.5bil has been set aside for operational expenses of the 340 1Malaysia clinics, 11 1Malaysia mobile clinics, 959 health clinics and more than 1,800 rural clinics.
“RM4bil is allocated for the supply of drugs, consumables, vaccines and reagents to government hospitals and health facilities,” he said.
On contagious diseases like dengue and Zika, Najib said that the Government will implement initiatives to prevent and control them.


In addition, the National Community Health Empowerment Programme will be expanded at the cost of RM80mil, he added.

APPOINTING doctors, dentists and pharmacists by contract due to constraints in permanent posts has its pros and cons, said Dr Koh Kah Chai.


The Malaysian Medical Association (MMA) honorary general secretary said: “The pros are that they will be gainfully employed and will get the prerequisite training.
“But the worry is whether they will still be employed by the Government when their contract ends at the end of their housemanship.”
This move, to take place latest by December, was announced by the Prime Minister during Budget 2017, and is meant to benefit the nearly 2,600 doctors now unable to undergo housemanship due to lack of permanent positions in hospitals.
The Federation of Private Medical Practitioners’ Associations, Malay­sia, president Dr Steven Chow agreed: “It is an ad hoc measure.
“What happens after the end of their contracts? There will still be a logjam of doctors.
“If you increase the output of doctors, you should have made arrangements to increase the number of housemen and medical officer posts as well,” he said.
Likewise, the creation of a new civil service pay grade – 56, to be placed between grade 54 and Jusa C – is only a temporary measure in its objective of preventing medical and dental specialists from leaving Government service and addressing the delays in their promotion.
“It is a stop-gap measure, and some feel that it will delay promotion to Jusa C,” Dr Koh said.
Dr Chow said this was only an ad hoc measure that was unlikely to stem the outflow from the public sector.
The extra grade would mean doctors will take longer to reach the highest pay grades, which would in turn affect their pensions, he said.
On the Prime Minister’s announcement that the Govern­ment would cooperate with the private sector to run non-profit charitable hospitals, Dr Koh said: “While it is a noble idea, in the absence of details of the financing mechanism, we can’t really comment on the buy-in from the private sector.
“It appears to be a proposal of cost-sharing in the provision of healthcare to the rakyat.”
MMA past president Dr Milton Lum said the efforts to combat dengue, which was allocated RM80mil in the Budget, would benefit more from making the vaccine available.
“Vaccination is a cheap way of decreasing dengue cases.
“It’s better to spend the money on vaccination than on chasing mosquitoes,” he said.
For Zika, which was included in the RM80mil allocation, Dr Lum said that more public education efforts by the Health Ministry was necessary to prevent an explosion of cases.
On the overall health budget, Dr Koh said: “On the whole, the Budget seeks to address some of the acute ailments facing healthcare in our country, but I would say that the healthcare sector deserves more.”
Posted by Arbirage at 22:07 1 comment: