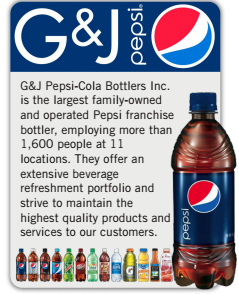 G&J Pepsi-Cola Bottlers, Inc., the US's largest independent Pepsi bottler, consistently looks for ways to improve its operations to drive business growth, and is an IT standard-bearer in the bottling and distribution industry.

Like many companies fighting for market share, G&J Pepsi's Chris Witzgall, Vice President of Information Systems, is constantly exploring ways that technology will drive operational efficiency throughout the company's 11 locations in Ohio and Kentucky so that he not only reduces costs, but supports sales, marketing, production and other departments in order to grow revenues. G&J focuses mostly on the activities that impact their core bottling and distribution centered businesses. Then they collaborate with a small number of partners to outsource non-strategic commodity workload. 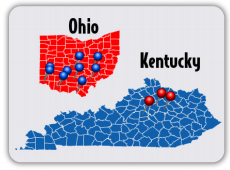 With the help of a consulting company., G&J Pepsi's IT team removed workloads by moving email and collaboration tools to the cloud using Microsoft's Office 365. They boosted their ability for real-time from anywhere on any device communication with LyncEnterprise Voice. Furthermore, they added Windows Azure to enable disaster recovery from the cloud. Then G&J outsourced the support of Office 365, Lync Voice, and a major piece of their server infrastructure to Outcousing company. By shifting some processes to cloud computing and outsourcing others, G&J Pepsi became more agile and efficient.

The transition allowed Witzgall's small IT team to stop maintaining, monitoring, patching and fixing the complex configuration problems with these workloads. By shifting to Office 365, G&J avoided spending $30,000+ in future hardware and software upgrades needed to support the latest version of Exchange.

"We were spending many hours a month on Exchange patches, backups and maintaining storage for the virtualization environment," Witzgall said. "Email is one of those areas we feel is more of a commodity service, and any time we spend supporting it is not time well spent."

Witzgall has worked with consultant on multiple projects to automate G&J's infrastructure. He views consultant as an extension of his IT team, and the partnership allows him to service the company's 1,600 employees with a small IT staff. In fact, the first time Witzgall engaged with consultant to explore moving to the cloud, consulting company recommended waiting. “G&J had already upgraded their infrastructure to the latest releases, their infrastructure was solid and running well – so it made sense for them to wait until the next major revisions were released in the cloud before they migrated,” says President of cloud consulting company.

The consultant team walked Witzgall through possible options for migrations and technology that would allow G&J employees to access information from any device with a single sign on. Consulting company  then gathered information to help Witzgall make the business case for moving the company's email to the cloud and adding Lync and Azure.

Pre-Assessment Analysis Reveals Cost Savings
Consulting company completed a technical assessment to make sure G&J could easily move to the cloud, and then a business assessment to make sure that such a move aligned with company business objectives. Consultant also provided a detailed hard cost return-on-investment report demonstrating how the new technologies would help G&J not only save money but give employees tools to help them operate and communicate more efficiently.

Pre-Assessment Analysis : G&J Pepsi also received a written plan explaining how to get ready for a cloud migration and a project plan outlining who would own what part of the migration to make sure everyone was on the same page. The process also includes documentation on how to set up the new system, how to cut users over and a communication plan IT managers use to tell employees what is going to happen and when. Consultant also provides end user training guides so employees know how to use the new system’s functionality.

Consultant's role was to manage the project, build the redundancy and failover capability and ensure there was no data loss in the migration to Office 365.

Because Consultant carefully watches Microsoft partner incentives, consultant was able to alert G&J Pepsi to funding from Microsoft that allowed G&J to reduce the consulting costs of installation by 75%. Additionally, Consultant helped G&J secure and utilize 100 free licenses of Office 365 and a promotion that offered an 80% cut in the retail cost of Office 365 licenses, saving G&J Pepsi's $100,000 over three years.

"The implementation was very smooth," Witzgall said. "Consultant handled the initial set up and testing, which was crucial. Then they helped us get the first set of users up and going, and we took it from there, with consultant acting as a resource when we needed it."

Moving to Office 365 allowed G&J Pepsi to eliminate $1,500 in annual spam filtering costs and another $2,500 in annual maintenance for Symantec Enterprise Vault, which the company used for email archiving. The move to the cloud-based system also freed up about 3 TB of storage, and it allowed G&J to give everyone in the company access to email with Microsoft’s low cost kiosk emails plans. HR will be streamlining their processes with this new digital communication channel. 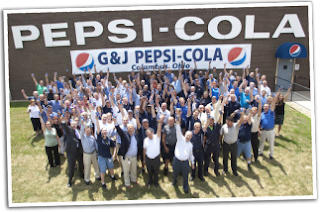 Lync Drives Internal and Partner Collaboration
The bulk of G&J Pepsi's 1,600 employees work in 11 locations in two states. In addition, many employees work from home, and the salesforce operates in the field on more than 300 routes. Because of the dispersed work force, G&J needed a more robust and mobile friendly collaboration system. Consultant helped them upgrade to the latest version of  Lync Enterprise Voice, which give them a new level of functionality including better mobile access and enhanced web meetings.

Azure Allows On-Premise Integration with Cloud Applications
Like many companies, G&J Pepsi needs its technology systems to be highly available and redundant. As part of building that redundancy, Consultant showed G&J how using Microsoft’s Windows Azure platform would provide them with disaster recovery for its critical authentication workloads.

Those workloads include Active Directory for user authentication, Directory sync for synchronizing users and groups between their on premise network and the cloud, and Password sync, which allows users to have single sign on abilities for their desktop computer and web applications.

"Azure's infrastructure as a service allows us to have full functionality to authenticate users without on premise equipment, so if we lost our datacenter, our employees can still fully communicate," Witzgall said.

With Azure, resources are readily available and accessible, user authentication requests are quick because Azure sits in the same data center as Office 365, and companies do not have to build the hardware or obtain software licenses to run it from their own data center.

Removing basic blocking and tackling technology maintenance tasks like email, backups and worries about disaster recovery allow Witzgall and his team to think more about how they approach the business and how they can make employees more productive.

"One of the biggest benefits is that Office 365 allows us to give our sales team all the information they need to get their jobs done," Witzgall said. Coupled with Lync, employees have "the tools they need to make a sale and to make more sales. Without a productive sales team, the company isn't going to grow." G&J continues to grow their partnership with  Consulting company. “They are on our same wavelength for outsourcing and being efficient. The consulting company continues to find ways to gain funding for us and use technology even if it means less revenue to themselves,” concludes Witzgall.