Mention the brand "Tiger Balm" and an overpowering scent of camphor - or your grandmother - may come to mind.

Those little glass jars are now hot in Hollywood, and celebrities are waxing lyrical about the unassuming white ointment.

Tiger Balm has found fans in celebrities such as actress Gwyneth Paltrow, who told American magazine US Weekly in March that the product was "a topical cure-all balm for muscle aches and pains".

Pop singer Lady Gaga also tweeted a picture of the product in January last year, while she was on her United States tour.

She listed it as a "backstage must-have", along with the painkiller Advil.

The brand also expanded its range of products to include items such as the Tiger Balm Neck & Shoulder Rub in 2005, and launched its first sub-brand, Tiger Balm Active, last year.

The sub-brand caters to young fitness-conscious individuals, and includes products such as the Active Muscle Gel and Muscle Rub. Hear that, Lady Gaga?

"To reach out to younger target-market groups, we have tapped into consumer trends and insights to understand their lifestyle needs," said Mr A. K. Han, the executive director of Haw Par Corporation.
Today, Tiger Balm products are available in more than 100 countries worldwide, such as Norway and New Zealand. 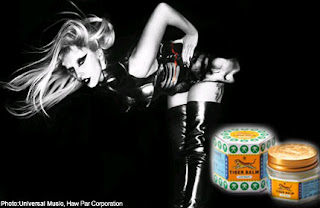 Another family favourite - Axe Brand - has also been making its mark overseas.

Produced by Leung Kai Fook Medical Company, the brand is most famous for its medicated oil.
It is distributed in 40 countries, including Panama, Australia and Greece.

Mr Leong Mun Sum, the managing director of the company, emphasised that Axe Brand products are suitable for people of all ages, despite the stereotype that they are used only by the older generation.
"Young people spend a lot of time using the computer. This can result in headaches, stress, neck and back pain, and Axe Oil comes in very handy for relief," he said.

Secondary-school student Kristofer Wong, 15, is one such Axe Oil user.

He uses it whenever he suffers from headaches, stomachaches and nasal congestion, simply because "it works".

He started using the oil as a child when his domestic helper told him that it was a remedy for headaches and other ailments.

The company has been tying up with related medicine and health-care businesses, and it aims to continue marketing Axe Brand products as souvenirs for tourists and as an ointment to relieve aches caused by using the computer.

Specialising in traditional Chinese medicine, the company reported record sales of $289.9 million in its latest financial year this year.

Of course, Tiger beer springs readily to mind when it comes to Singapore brands that have found favour internationally.

A flagship brand of Asia Pacific Breweries (APB), Tiger beer has won more than 40 international awards and accolades, and is sold in some 60 countries worldwide, including Canada, Spain and Britain.

Shareholders of Fraser & Neave last week voted in favour of selling APB - of which it has a 40 per cent stake - to Heineken in a US$6.3-billion (S$7.7-billion) deal.

But Tiger beer's fan base remains unfazed, in part because of the beer's strong branding.

For instance, the beer has garnered fans overseas, thanks to heavy promotion, ranging from the use of sexy ads (some were so sexy they were banned in Britain) to its Tiger Translate events, which see the brand tying up with hip artists on design projects.

The events have run in the US, Australia, Britain, China, Cambodia and, of course, Singapore, besides other countries, and have even caught the eye of newspapers like Britain's The Guardian.
The beer itself wins fans, thanks to its taste, and gets tourists interested in our little red dot.
The European-style lager has found fans from as far as Norwich, England.

Mr Kevin Allen, 51, is a managing director of a company that distributes products such as aquariums.
He had his first taste of Tiger beer at a Thai restaurant near his home in Norwich six years ago.
He indulges in the beer occasionally and enjoys its "natural fresh taste".

When he realised Tiger beer was a Singapore brand, he said: "That's another good reason to visit Singapore."

Except from Asia One